A downloadable game for Windows and Linux

Chickens is a level-based puzzle-game that gives players a chance to solve problems in a new way. It presents bizarre problems that require bizarre solutions.

The chickens must negotiate their way through a series of complicated spaghetti junctions of pipes (which are controlled by the player) in order to reach the end of the game. Not only do they have to deal with the threat of the evil ducks who are out to get the chickens, but the layout of the pipes also poses a puzzle. The game is divided up into levels, which are subsets of the pipe system. Each level consists of a series of pipes with obstacles, a certain number of chickens at the start, a target (number of chickens that have to reach the exit), and a time limit. The player must solve a problem by sending the target number of chickens to the end of the level within the time limit in order to be allowed access to the next level.

A chicken will die if it encounters a duck and attempts to fight it (and so will the duck it's fighting), or come across a bomb or a dead end. However, they can reproduce by laying eggs, and sending the eggs to the incubators to hatch. To make things difficult, the chickens' eggs come in four different colours (green, red, blue and yellow), and must be guided through the same system of pipes to the correct incubator for that colour in order to hatch. Any egg of the wrong colour trying to enter will be destroyed, along with one egg in the incubator waiting to hatch. The ducks can lay eggs too, and if enough ducks' eggs try to enter the incubator, it will be taken over and become a ducks' eggs incubator. Of course, it can be re-taken by the chickens by sending enough chickens' eggs to the incubator to destroy any remaining ducks' eggs.

Chickens spawn from the entrances on the left (that look like taps), and must reach exit on right. Ducks are placed in the level by the level designer. Additionally, there are ducks' eggs taps at the top that can maintain a constant and steady stream of ducks' eggs (ducks are Mean Green Egg-laying Machines). These are a nuisance, but can sometimes come in handy.

The junctions consist of ordinary pipes, interchanges, command blocks (eg. "Lay Egg"), and other obstacles. The main control the player has over the game is the ability to switch the paths of some of the pipe interchanges by moving the cursor over the interchange and pressing a button, so that the player can guide everything to where they want it to go. The player can also release eggs that are being delayed.

Some of the interchanges have a red pipe running underneath them. If at least one object is passing through this red pipe, the state of the junction changes to it's changed state and does not revert to it's unchanged state until the red pipe is empty again. This makes it possible to construct things like logic-gates out of pipes 'powered' by a stream of ducks' eggs (usually supplied from the ducks' eggs taps). These can be combined to create computational logic circuits such as AND/OR/NOT gates, adding-machines, flip-flops, stack-based calculators, and even a fully fledged Turing-complete machine (although the last two have yet to be implemented), so it should be possible to build a virtual computer that runs entirely off duck's eggs.

There are also a few obstacles (pick-ups) within the level, including bombs, radioactive chicken-feed (which will sterilise any chickens or ducks that eat it), and superhero-costumes (leather jacket and sunglasses) that turn your fowl into SUPERCHICKEN or SUPERDUCK who can then win all fights.

The game comes with an integrated construction-set (level-editor) so you can create and play your own levels, and share them with others.

Chickens is available for Windows, DOS, Linux (the Linux version is a bit out of date). Mac version coming soon.

Note that this is more of an on-going pet-project than a finished game, so it may still be a bit rough and unpolished in places. But you can download it now for free, and enjoy what there is. 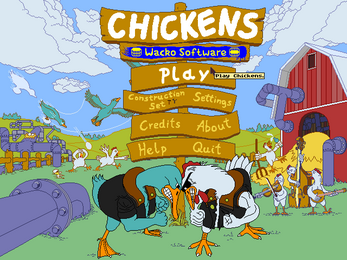 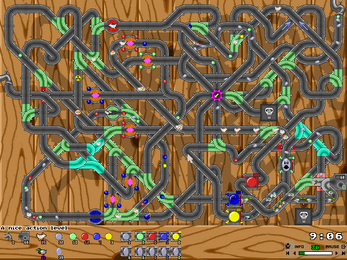 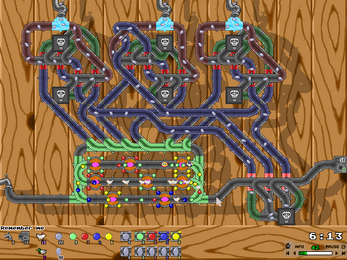 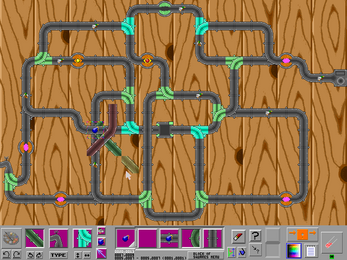 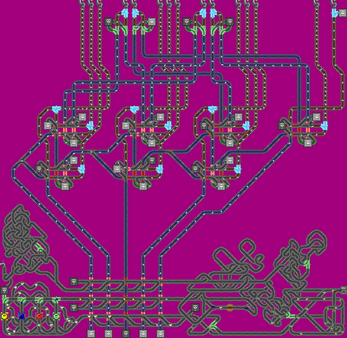